“When I tell my story, it’s not about denouncing Germans and their history, it’s about using the past for the future, and I think I’m an example of building bridges, only then come closer to peace.”  (Bernd Wollschlaeger)

Many years ago, Bernd Wollschlaeger has written a book about his exciting life describing in detail how the son of a German Nazi and Holocaust denier became finally a Jew.  The author has a story that is anything but commonplace and that he kept for a long time. A native of Bamberg, born in 1958, catholic educated who spent his youth in Meckenheim, where he graduated from high school. His German past was long buried deep. One of the reasons was that his father had put him through a choice: either your parents or Judaism. And Bernd Wollschlaeger had decided for his Jewish belief. 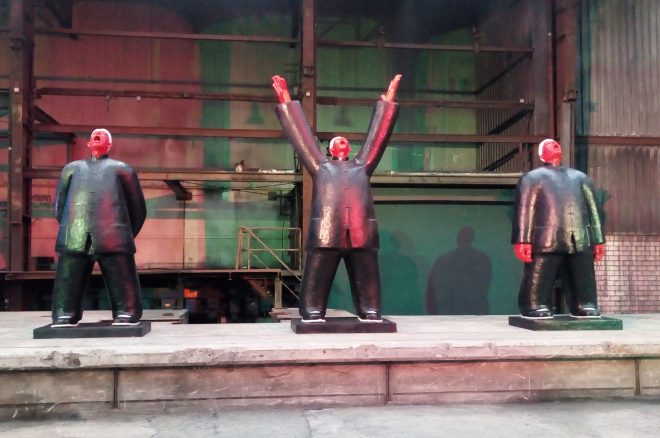 “The East is Red” by Liu Ruowang, China
picked up at NordArt Exhibition 2018 in Germany

His family always had this dark secret. His father used to tell always the  same stories from the war, and he used to be proud of his country. He fought on every front: France, Poland, Russia. And in the stories he told his son, it was all about heroes and honor, Artur Wollschläger member of the German Wehrmacht elite. He served under general Heinz Wilhelm Guderian, the commander of large tank units – and father of the German blitzkrieg. But on the other side everybody talking about the Holocaust was just a communist, traitor and lier. His mother told him about the other face of the war, the pure horror and civilian victims. She had made quite different experiences as a Sudeten German, born in Carlsbad in the Czech Republic.

One day, through a teacher, he took part in a peace project involving young Israelis. That was in 1978. He became friends with some. They invited him to visit them in Israel. On the first day there he learned at dinner that his host father was a Holocaust survivor who showed him the tattooed number on his forearm.  The next day they drove to Yad Vashem what turned out to be a drastic emotional and mental experience changing his life. What impressed him most, that so many Jews could overcome their hatred after the Holocaust. So he wanted to find out more about this belief. He got in touch with a Jewish Community when back in Germany, and after a very long process converted finally to Orthodox Judaism.

In 1987 Bernd Wollschlaeger emigrates to Israel, six months later his father, who has long since broken up with him, dies. In Israel he first works in a hospital as a doctor, then is drafted into the Isralis army, the son of a Nazis. All the time in Israel he does not talk about his biography and puts the story in a box for a long time. After 7 years in Israel he immigrated to the USA with his family. There his son told the story about his famous Nazi grandpa in the Jewish school in Miami . So Bernd Wollschlaeger had to justify the behaviour of his son in a talk with the headmaster and the Rabbi. He told them his story how he became a Jew, and they urged him to do the same in the class.

The circle has closed, because afterwards he began talking about the secrets of his German past and Jewish belief in many lectures. And lateron he also wrote the book A German Life about his very astonishing development, his contribution for a dialogue between the different cultures of this world.

Under the following link you find a film with a lecture hold by the author: